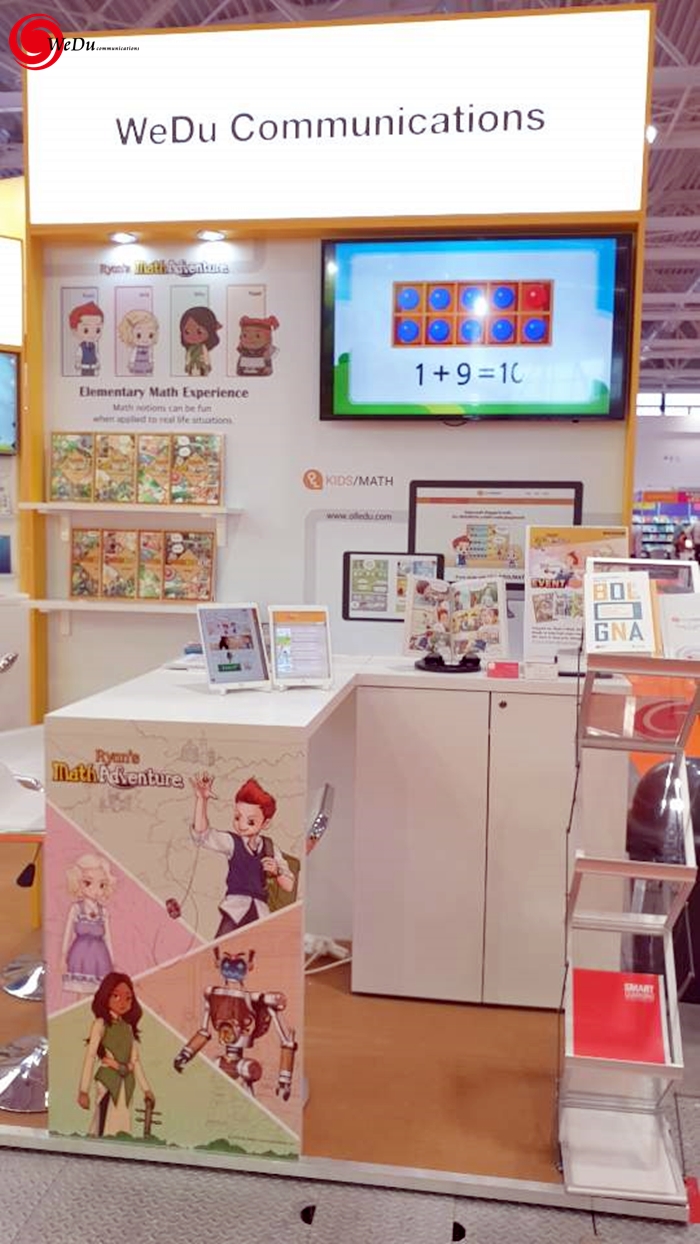 The Bologna Children's Book Fair is the largest book children's book fair in the world,
featuring more than 1,000 publishers from 70 different countries each year.

WeDu Communications "Ryan's Math Adventure" booth.
Not only did we show off Ryan's Math Adventure Series, but we also introduced our OLL Kids/Math site.
A lot of the digital content and interactive books we showcased at the Beijing International Book fair last year were on display as well.

Ryan's Math Adventure, Prologue to Book 3 were placed on display,
currently all of our books are on sale on Amazon, both paper back and eBook.
Our books analyzes elementary math curriculum from Korea, China, US, and Japan
We had many visitors at our booths that showed a lot of interest.

For kids that have a hard time learning about math,
now can learn math in a fun and interactive way : )

Another item visitors were interested in was our animation.
The comics that grabbed children's interest, they can learn math along with the comic characters
that channel the math to create magic!

At our booth, we played several different videos of our animation series.

On our first day as well, we participated in a Talk event at the Digital Cafe.
In the Digital Cafe Talk Event, we were able to introduce our company and products.
We presented our Ryan's Math Adventure, OLL/KIDS Math, interactive and other digital content.
We had several visitors stop by our booth and couldn't pull away from our books!

During the fair, not only did Italian locals stop by but,
visitors from US, Turkey, Hungary and other nations stopped by our booth as well.

A wide variety of programs were held throughout the exhibition.
It wasn't just a simple display of books, but it was a series of lectures,
business meetings and copyright sales took place for the past four days.

It has been almost one year since we have debuted Ryan's Math Adventure the American Market
and we are trying our best to make sure it is know all around the globe!